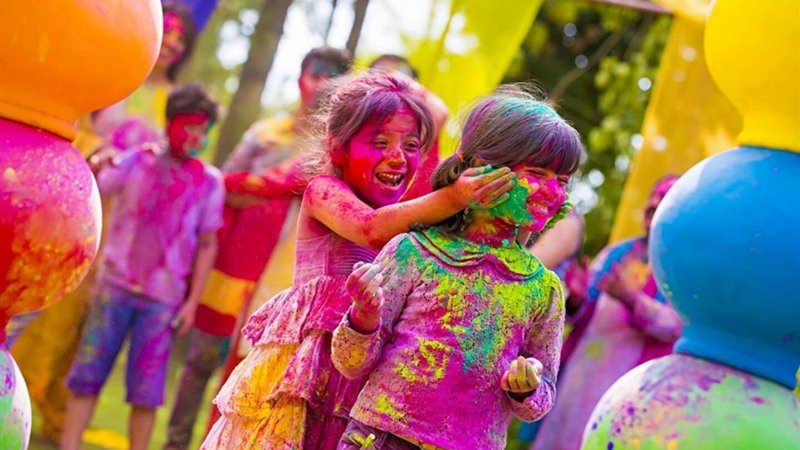 Holi is a much-awaited festival, especially among crazy people. The gleesome festival marks the onset of spring. It is a fête where colors are an important part of celebration. Holi Festival Of colors is the triumph of good over evil, fertility, and love.

Though people around the world take part in this festival, it is celebrated with the highest spirits in India and Nepal. Holi celebration in India Is associated with colored powders that end up on coating every body part of the participants or by throwing that powder over them.

The phrase – “Bura Na Mano HoliHai” which is associated from years somewhat translates to the spirit of the festival. Do not feel unpleasant, it’s Holi after all. The significance lies in the mythological legend of Prahlad and Hiranyakshyap.

The good old celebrations of the Holi festival extend over two-days. How to celebrate Holi?

A ritual known as HolikaDahan takes place a day before the actual Holi. A pyre of wood logs is prepared. The people gather together around the pyre for HolikaDahan at night. They offer dung-cakes in the fire to signify the win of good over evil.

Next morning after HolikaDahan people gather in public spaces in white clothes and take part in the second part of this festival: RangwaliHoli. You can easily spot people running after each other and kids chasing their friends with toy pistols filled with colored water to color and drench others in the colors of love.

The reason to celebrate – The Legends

Behind the festival of Holi, one of the famous legends is of Prahlad and Hiranyakashipu. According to this legend, once lived a powerful kind named Hiranyakashyap who was also a devil. He wanted everybody to worship him as he considered himself God.

To his ignorance, his son, Prahlad started to worship Lord Vishnu. This irritated the king and in order to get rid of his son, he asked Holika, his sister to enter fire with Prahlad in her lap. Holika had a blessing that she will be unscathed in the fire.

Legend has that fire couldn’t Prahlad and he was saved due to his devotion to Lord Vishnu whereas Holika paid a price and burnt in the same fire.

It is from this legend that the tradition of a bonfire on eve of Holi festival came forward and is celebrated as HolikaDahan, as the show of the power of good over evil.

Holi celebration near me at Mathura and Vrindavan are one of the best opportunities to soak in the unique celebrations. Book the special Holi tour package online.

There are various aspects of Holi that makes it so significant in every Indian’s life.

Its significance is threefold: mythological, cultural, and social. Mythological significance: This festival gets us close to our customs and myths as it is the celebration of these legends.

Folk Significance: According to mythological stories this is another legend that affirms the triumph of virtuous over evil. It reassures the people of the power of truth and gives them the power to fight evil. It is extremely important that people follow a moral conduct in their daily lives.

Social Significance: The fabric that holds our country together is our togetherness and the festival of Holi celebrates that tradition. It brings people from all domains of life together and not just Hindu’s to be a part of the joyous festival.

Finally – How to get that color off your skin?

The only bit irritating part of this joyous festival is to either prevent the color from sticking on your skin or to clean it away after the raucous affair.

The best method is to prevent the color from sticking to your skin. For this, heavily oil your skin and hairs before you step out to play. When I say heavily, I mean heavily. Put up as much oil you can as prevent those chemical colors to penetrate your skin.

There isn’t much you can do rather than waiting if the color has gotten to your skin. Although, the recent trend is people buying chemical free or organic colors to play Holi that aren’t harmful to the skin.

So when it’s Holi, do not hold yourself back and enjoy every bit of among your friends, family and loved ones. It is a festival that promotes good over evil so let it enter your life and let the colors sparkle your life with happiness.

10 Tricks To Get Cheap Flights For Any Destination

Why Choose Textbooks to Prepare for Your Exams?

The Changing Landscape of Digital Marketing in Canada

Best Ways to Get Your Business Noticed in Your Local Area

This website uses cookies to improve your experience while you navigate through the website. Out of these, the cookies that are categorized as necessary are stored on your browser as they are essential for the working of basic functionalities of the website. We also use third-party cookies that help us analyze and understand how you use this website. These cookies will be stored in your browser only with your consent. You also have the option to opt-out of these cookies. But opting out of some of these cookies may affect your browsing experience.
Necessary Always Enabled
Necessary cookies are absolutely essential for the website to function properly. This category only includes cookies that ensures basic functionalities and security features of the website. These cookies do not store any personal information.
Non-necessary
Any cookies that may not be particularly necessary for the website to function and is used specifically to collect user personal data via analytics, ads, other embedded contents are termed as non-necessary cookies. It is mandatory to procure user consent prior to running these cookies on your website.
SAVE & ACCEPT